Investors are attracted to small caps because of the outsized performance historically achieved. However, based on how they typically allocate money, many investors often overlook the smallest companies which historically had the largest impact on the group’s outperformance. As of June 2017, approximately 3,600 companies traded on major U.S. exchanges.¹ Roughly 1,750 of those companies have a market cap of $1 billion or less, representing some $567 billion of market cap. Large, institutional investors pass over these smaller companies in favor of larger ones in which they can take more meaningful positions. We believe that this relative lack of attention and ownership of companies with a market cap of less than $1 billion creates an institutional “Blind Spot.”

In our experience, we’ve found that many of these companies are often profitable, conservatively capitalized, and self-financing, so they are often ignored by sell-side analysts who have no incentive to offer research coverage. As a result, these companies are less well-known and their shares may trade less frequently. Most small cap investors fail to realize (as shown in the chart below) that as a group, the smallest companies have historically generated the highest returns. However, those sized companies are generally excluded from the average “name-brand” small cap portfolio.

Focusing On the Blind Spot is Worth the Effort

For the thoughtful investor willing to “take the blinders off” and gain exposure to “true small caps,” we believe a compelling opportunity persists. The performance of this largely ignored group of companies is often quite compelling. Over the past 90 years, the smallest decile of U.S. stocks has outperformed all other deciles – on both an absolute and a risk‐adjusted basis – providing an average annual return of 26% since 1927.

Today, the average size company in the first, second, and third deciles are $121 million, $522 million, and $1.0 billion, respectively.² This compares to $2.3 billion weighted average market cap for the Russell 2000 and $3.2 billion for the top 50 (by assets) actively managed small cap mutual funds.

The most recognized small cap benchmark is the Russell 2000 Index. Yet, the benchmark and the ETFs that track it fail to provide investors significant ownership of the companies with the smallest market caps. Over time, that problem has increased, and investors are getting even less exposure to the smallest companies in the small cap universe. 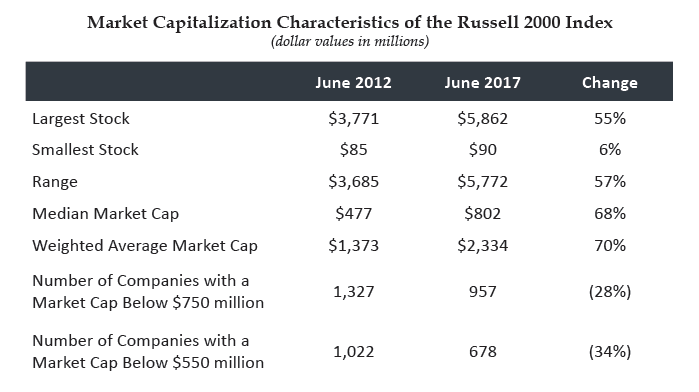 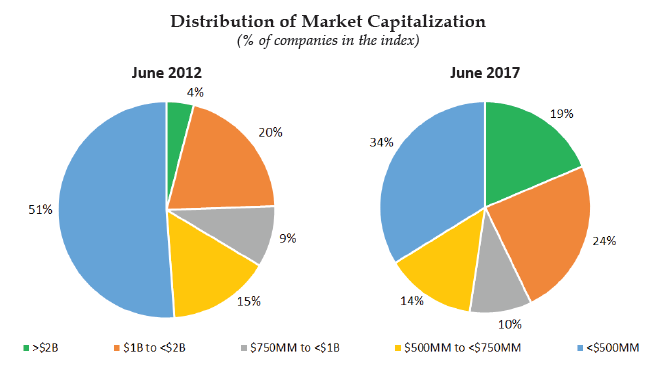 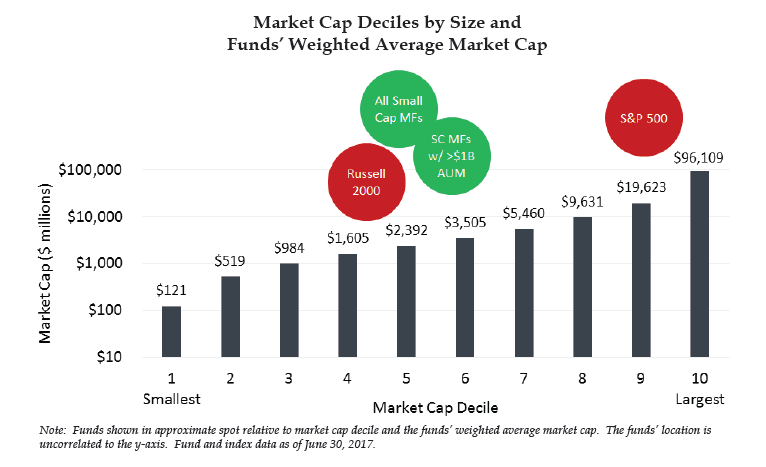 A Passive Approach Arguably Fails in the Objective and Increases Risk

The rotation of funds to passive investing is well-documented. We are not surprised that, in the ninth year of a bull market where passive investing has dominated (delivered the best results), the drum beats are growing louder for active managers to hand over their Bloomberg terminals. We believe that in the least efficient areas of the market, an active approach has a higher probability of generating better risk-adjusted returns (with acknowledgements to our obvious bias). We believe better risk-adjusted returns come from companies that can compound value at an above market rate but also can provide good downside protection for when things do not work out as expected.

For investors seeking exposure to small caps through a Russell 2000 tracking ETF, the decreased downside protection over the last five years is a hidden risk. Excluding the technology bubble in the late 1990’s and the Great Recession of 2008-2009, the percentage of loss-making companies in the Russell 2000 Index is at a record high. In addition, the index has also seen a declining dividend yield and current ratio and a rising debt-to-equity ratio. Simply put, the average company in the Russell 2000 Index today is of lower quality than only a few years ago.

One would think that, based on diminished fundamentals and higher uncertainty around future profits, these companies would be assigned a lower valuation. In reality, the average market cap of a company in the benchmark has risen by more than 65% since June 2012 and a variety of traditional valuation metrics (P/E, P/CF, P/B) have increased. Today, a passive portfolio consists of companies that, on average, have a lower margin of safety and a higher valuation in addition to having fewer of the smallest companies that historically have generated the outsized returns.

Most Active Managers are Not Focused on the Blind Spot

There is an often‐overlooked aspect of small cap offerings by active managers that does not receive much attention: despite the fact that many professional investors closely track the Russell 2000 benchmark, many do so with a heavy bias toward owning the largest, most liquid stocks in the index.

Half the stocks in the Russell 2000 Index have market caps under $800 million, and many of these stocks share these distinguishing characteristics:

Investing in small, illiquid, under‐researched stocks takes more time and effort to do well. Moreover, the absolute size of these companies becomes prohibitive when investing large amounts of capital. 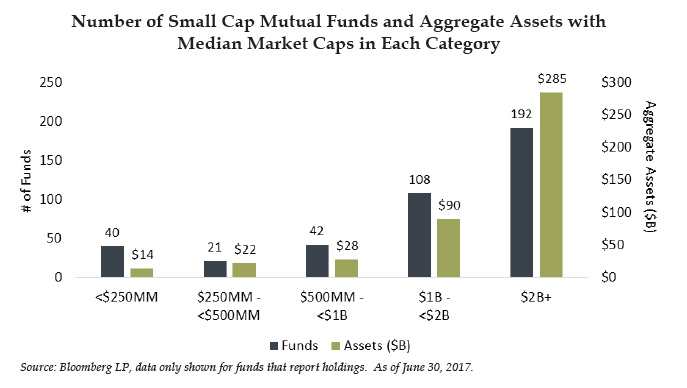 The average “asset gathering” small cap manager would rather piggyback on the long-term track record of the asset class, in our opinion, than do the hard work of owning the very vehicles that contributed most to this historical outperformance. Investing in small companies is simply not as scalable—or lucrative—as managing money in larger, more liquid companies.

It is no surprise that small cap mutual funds with more assets also have portfolios with higher median market caps. For small cap mutual funds with more than $1 billion in assets, their average median and weighted average market cap are $2.5 billion and $3.3 billion, respectively. This is to say that half of the companies owned in these portfolios have a market cap that is greater than $2.5 billion, and half of the assets invested in these funds are in companies with a market cap greater than $3.3 billion.

A relatively small number of portfolio managers pay any attention to the smallest stocks in the index despite the fact that they represent a significant number of its constituents.

With the Russell 2000 benchmark having 50% of its capital tied to companies with a market cap of $2 billion or greater and the majority of small cap mutual funds with a similar weighting, it becomes easier to understand why we ask the question, “Is true small cap investing an institutional blind spot?” As seen below, one could conclude that indeed it is a challenge for institutions to capture exposure to what has historically been the best performing segment of the market, the companies in the bottom deciles in size as measured by market cap. 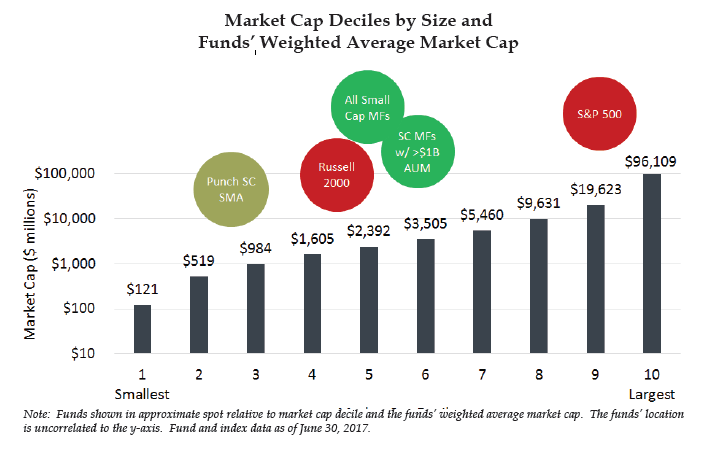 It can be a challenge to gain “true small cap” exposure. But the smallest, best capitalized, profitable companies are the ones that have created the alpha for small cap versus large cap. We recognize that managing a small cap strategy focused on the Blind Spot will inherently drive capacity constraints, and capacity is something we monitor closely. A good rule for companies is that returns on capital are highest where capital is most scarce, and we believe the same applies to investment management.

We believe investment managers who are willing to spend the necessary time and effort to research and invest in this neglected area of the market, and who are also willing to limit their capacity, will not only be more representative of “true small cap investing” but also will have the benefit of a historically superior asset class as a tailwind.

At Punch & Associates, our philosophy is to seek out investments in areas that other investors ignore and where a dearth of capital creates ideal conditions for security mispricings. Our view is that by maintaining our investment criteria and margin of safety, we will continue to have a repeatable investment process that can deliver above average results. By consistently focusing on the Blind Spot, we are able to identify a fertile environment in which we apply our investment approach. We remain convinced that the smallest companies in the small cap universe provide us with the right area to begin our search for investment value. The key to successfully implementing a strategy focused on smaller, less-known companies is to remain patient during periods of short term volatility and underperformance. We are fortunate to have partners that entrust us with their capital and allow the time needed for the strategy to work. We welcome conversations with those that believe in the approach and have a similar investment mindset and time horizon.

Decile data as of May 2017. Source: Kenneth French Library. R2K data as of June 30, 2017 to allow for rebalance. Source: Bloomberg

This material is for informational purposes only and is not and should not be construed as accounting, legal, or tax advice. Punch & Associates is not qualified to provide legal, accounting, or tax advice, and accordingly encourages clients and potential clients to consult their professional advisers with respect to such matters.
The information is provided as of the date of delivery or such other date as stated herein, is condensed and is subject to change without notice. Information regarding market returns and market outlooks is based on the research, analysis and opinions of Punch & Associates, which are speculative in nature, may not come to pass, and are not intended to predict the future performance of any specific investment or any specific strategy. This document does not purport to discuss all of the risks associated with any specific investment or the use of any strategy employed by Punch & Associates.